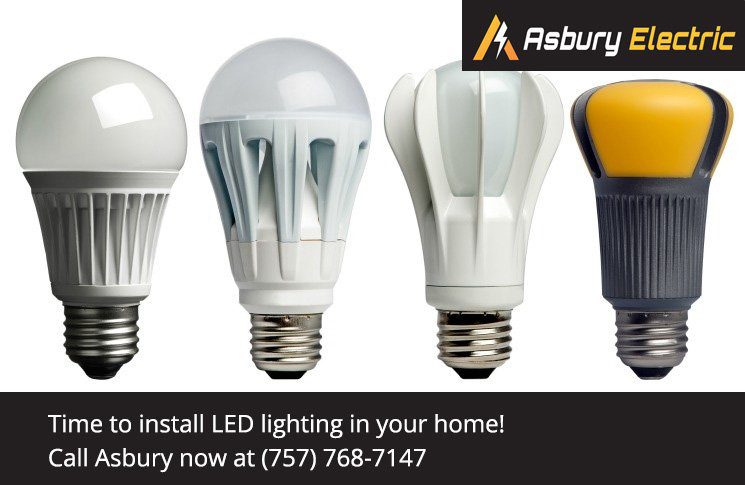 Light bulbs are something we use every day without much thought. Walk into a dark room, flip the switch, problem solved. While we can thank Thomas Edison for this wonderful technology, things have evolved a lot over the past one hundred and forty years. The days of incandescent light bulbs are drawing to a close and newer light bulbs are here to take their place. There are two types that are widely used – CFLs (compact fluorescent lights) and the LED light bulbs (light-emitting diode). If you are currently using incandescent bulbs or CFLs, it’s time to consider making the switch to LED. It might seem a little daunting to have a professional lighting contractor replace every light bulb in your home, but it will be well worth it.

Incandescent bulbs were commonly used in homes until the last decade. While they do the job of producing light, they get extremely hot, use a lot of electricity, and burn out quickly. Most incandescent bulbs must be replaced every few months. Although they may be cheaper to purchase at first glance, they cannot keep up with the newer light bulbs in the long run.

Although they do cost more than an incandescent bulb, CFLs last about seven times longer and use 75% less electricity than incandescent bulbs. While these are definitely an improvement over incandescent lighting, CFLs still aren’t as good as LED light bulbs. Some CFLs contain mercury and many people complain that the light they produce isn’t the greatest quality.

Until a few years ago, LEDs ran about $70 a bulb but as technology has progressed, so has the production of LED bulbs. Most LEDs range from $6 to $10. While their price tag may not be as cheap as incandescent bulbs or CFLs, they are definitely worth a few extra dollars. LEDs have a lifespan of forty times that of an incandescent bulb and almost six times that of a CFL. LED bulbs can run for almost 6 years before needing to be replaced. In that lifetime, the electricity they will use amounts to about $35.

So now the question isn’t IF you should use LED light bulbs in your home, but WHICH LED bulbs you should use. Light bulbs all come with their own little language and it can sometimes be difficult to know which bulb is the one you want. You can contact your lighting contractor to help you select which bulbs are right for you. There are 3 basic terms when looking at LED bulbs: size, lumens, and Kelvin units.

When choosing a bulb, you need to know the diameter of the bulb at its widest point in eighths of an inch. Most bulbs will tell you the size and style. For example, a standard LED bulb is labeled with an A for “arbitrary”. If you see a bulb labeled A19, that means its a standard/arbitrary bulb that measures 19 eighths of an inch at its widest point. There are other codes to distinguish the light bulb styles. These are the most common uses for the types of bulbs:

Lumens indicate the brightness of the bulb. In some rooms you may want to have brighter lights, while not in others. Incandescent bulbs are labeled in watts, which only indicated the wattage used. Higher wattage meant a brighter light but also more energy being used. LED light bulbs can produce different amounts of brightness while using a fraction of the wattage. For example, a 40 watt incandescent bulb may be used for a bedside lamp, whereas a 450 lumen LED bulb would also be used but it only requires 4 watts. So the bulbs would both produce the same brightness but the LED bulb would use 90% less electricity. Bulbs generally range from 450 lumens (a bedside lamp) to 1600 lumens (overhead kitchen lighting).

The third term you’ll need to know, Kelvin, involves the temperature of color that the LED bulb emits. A lower Kelvin number (2700K to 3500K) refers to a more warm, orange color to promote a cozy atmosphere, such as a bedroom. In other rooms, like the kitchen, a higher Kelvin number (5000K) would mean the bulb has a cooler, bluish hue.

Choosing the right LED bulbs for your house may seem a little overwhelming, but asking Asbury Electric or another licensed electrician would make the transition easier. Remember, the sooner you switch to LED, the faster you can start saving money.